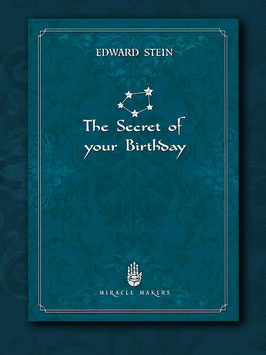 SOYB - The Secret of Your Birthday

„This is one of the most important mental effects in all of the magic world.“

A spectator is chosen by other members of the audience. You give this person a horoscope book; one which looks to all concerned like a normal book that can be bought in any bookstore. You ask him to look up his own zodiac in the book, while remaining some distance away from him. You don?t have to see whether the spectator has turned to the front of the book, or to the back. In order to see if the predictions in the book are accurate the spectator quietly reads a little from one of the three categories of life on her page. He doesn?t tell you which category he reads about, and says absolutely nothing about it?s content.

At this point in the performance the audience, including the person reading the book, will swear that you have been given no information. Despite this, you will be able to determine exactly what the spectator?s sign is. Amazing, isn?t it?! The audience will think you are a talented astrologist or even a prophet.

Oh, and buy the way, you will even be able to determine the correct week in which the spectator has his birthday. If a doctor is in the audience, and only then, you can even go as far as determining the person?s exact date of birth!

With SOYB you will be able to present an effect that was impossible up until now.

You don`t have to do any pre–show work or ask any questions, and the spectator writes absolutely nothing down. Nevertheless you will inexplicably be able to determine the correct birthdate of a stranger!

You don?t have to hide anything. This trick is usable in any imaginable situation.

Finally, a book test that makes perfect sense. "The Secret of Your Birthday" enables you to create miracles easily and powerfully. Congratulations, Edward on creating such an amazing effect.

The "Secret of Your Birthday" is a book test that enables you to reveal someone’s birthday and astrology sign with nothing written down and no question asked.

It can be performed for one person or many, and has a profound effect on everyone who sees it, as it should be impossible. This remarkable book test is also easy to learn and perform.

I don´t know how I´ve managed until now without it.

„This is one of the most important mental effects in all of the magic world.“ Ted Lesley (on the 1st edition in 2004)